The Chimpanzee and Wildlife Lodge

This renowned Kyambura Gorge Lodge, with entirely remodelled public areas and gardens, has been converted from a coffee store to create a breathtakingly beautiful space. The lodge is located on the edge of Queen Elizabeth National Park with sweeping views of the rolling savanna, the distant mountains of the moon, and the sunken Kyambura Gorge.

The guest bandas have a afro-chic theme with the accent on local artifacts re-imagined in a new context. Each banda offers a unique view either across the savanna or the gorge. There are four new deluxe bandas and four standard bandas. A new spa and swimming pool was launched in 2019.

The lodge is the ideal location for tracking the lost chimps in the sunken forest of Kyambura Gorge nearby and seeing the amazing game in one of Africa’s most beautiful parks, centred around the waterway of the Kazinga Channel. The park has six hundred amazing bird species, the highest in an African park.

New walking safaris have been created around the lodge to experience the dramatic landscapes of Kyambura gorge and the Queen Elizabeth savannah, and visit a reclaimed wetland. Guests can walk along the Kyambura gorge buffer zone we have created to protect the fragile ecosystem from encroachment and contribute to its long-term conservation project by planting a seedling.

Ready to book your safari to search for the lost chimps of Kyambura Gorge? Contact our sales team now!

Personal butler service for all guests.

Wi-Fi is available in the main lodge building. 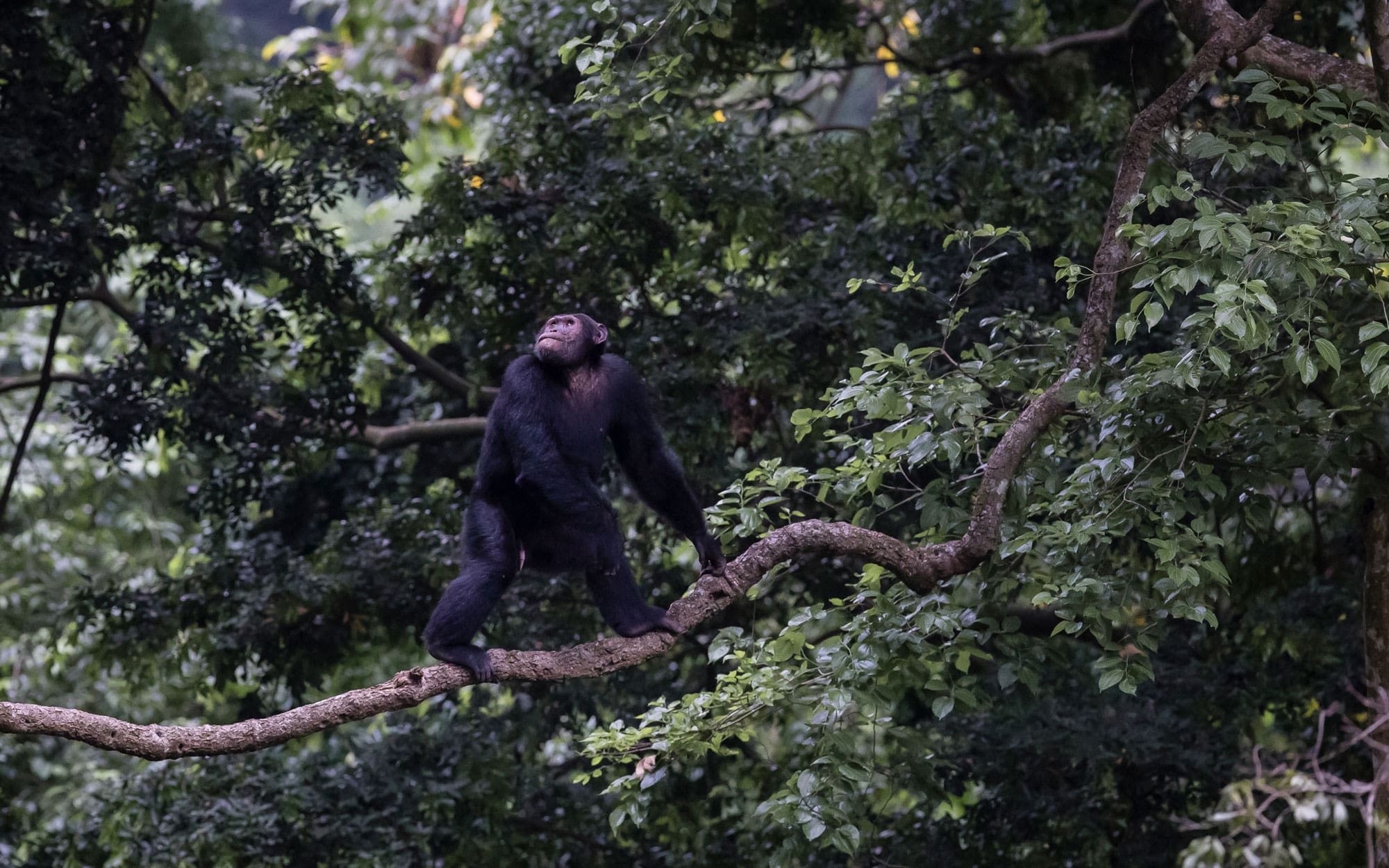 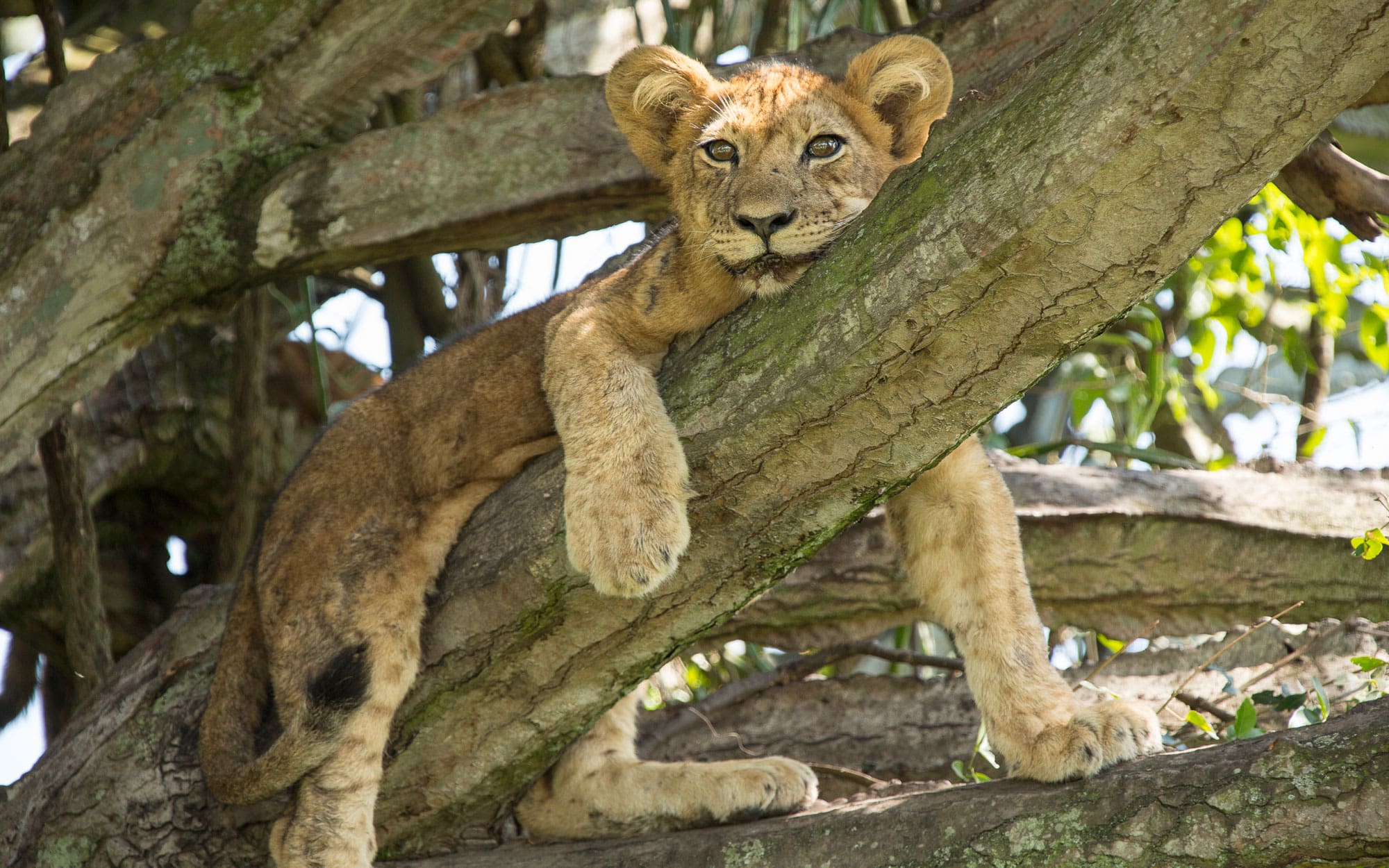 Tracking chimpanzees in their natural habitat, as they swing from the branches in the canopy high above the forest floor is nothing short of exhilarating. The chimps effortlessly cross and scamper through the trees above the gorge, and visitors on the other hand must cross the river using natural bridges in order to keep up with the chimps. So although the walk usually lasts only 2–3 hours, descending the steep gorge and crossing the log bridges over the river requires some agility and fitness.

Chimpanzee tracking is also available in nearby Kalinzu, a forest reserve 30 minutes drive from Kyambura Gorge Lodge where there is a community of about 40 habituated chimpanzees.

Queen Elizabeth National Park is considered to be one of Uganda’s most varied and most beautiful protected areas. Queen, as she is affectionately known, is home to two of Africa’s big cats, the majestic lion and the elusive leopard. Kyambura Gorge Lodge guests can explore the plains of Queen Elizabeth Park in Uganda on a variety of game drives, usually at dawn and dusk. It is when daylight hours are coolest that wildlife is most active.

Join a local scientific researcher on his daily game drive in Queen Elizabeth National Park to locate and record the behavior of a lion pride he is studying. This activity is best done in the mornings when there is ample time to track the pride and chances of finding them are high.

It is highly uncommon for lions to actually climb trees. In fact, there is only one subspecies known to climb trees regularly, and one of the two populations of these subspecies can be found in Ishasha, in the southern sector of Queen Elizabeth National Park. Finding a pride lounging on the branches of one of the many fig trees in the park is considered to be one of the highlights of visiting the park.

The Kazinga Channel is a 32-kilometer long channel, rich in wildlife, that links Lakes Edward and George. Boat trips down the channel depart from Mweya Safari Lodge (about an hour’s drive through the park from Kyambura Gorge Lodge) and last 3-4 hours. The boat cruise provides a wonderful opportunity to photograph the many animals that come to cool off at the waters’ edge, including lion, buffalo, hippo, elephant, and leopard.

Set up by Damien Hirst, the Rwenzori Sculpture Foundry & Gallery are a short drive from Kasese Airport. Sculptures by rising Ugandan artists sit alongside works by leading European sculptors, the result of collaborations and artist residencies. All works are inspired by the people, culture, wildlife and landscape of Uganda, and make the perfect memento to mark an unforgettable journey.

The Rwenzoris, or the Mountains of the Moon, so named by the Hellenic astronomer Ptolemy, have a legendary beauty. They were explored and mapped out by Henry Morton Stanley, Emin Pasha and Prince Luigi Amedeo di Savoia.

At the centre of the range are six peaks capped with ice and snow and three glaciers. The mountains – about 120 km long – were forced up during the creation of the Great Rift Valley. The highest peak of Mount Stanley is Margherita, which rises to 5,109m, the third highest in Africa after Mount Kilimanjaro and Mount Kenya.

The heavy rain makes the mountain flora luxuriant, growing to absurd proportions, with giant lobelia and groundsel shooting up to 10 metres. The wild flowers and birds are enchanting.

A hike through the lower reaches of the central Rwenzori needs about six days; ascent of the peaks is a technical climb and takes a further two days and requires climbers to be physically fit and equipped with ropes, crampons and appropriate mountaineering equipment. The best time to climb the mountain is from June through to August and from December to February. Climbing is organised by Rwenzori Mountaineering Services.

Both Uganda and Rwanda offer some of the world’s best bird watching, with a vast diversity of bird species. Uganda has over 1,000 bird species with 150 found only in Uganda. Rwanda has over 700 bird species and is home to the second highest number of Albertine endemics in the Albertine region. Each of our lodges offers the chance to see a number of different birds, with the vast majority endemic to the Region.

“Kyambura Gorge – a heavenly Soho House-like lodge complete with four-poster beds, giant in and outdoor showers, plus a plains-fringed pool.”

“Should western societies globally follow by example Volcanoes Safaris conservation and community ethos, our world would be a better place. We have respect and appreciation for what you are doing. Thank you!”

“The Kyambura Gorge Lodge is a jewel to be discovered! We were well taken care of and highly recommend this lodge if you’re visiting Queen Elizabeth National Park.”

“Overlooking the gorge and Savannah of the QE park this lodge is delightfully furnished and each bungalow has a view. As you leave the main road in the village a tiny track leads to the lodge entrance behind which the lodge opens out into a spacious garden, lounge and veranda. The food is excellent with superb vegetarian options.”

“We had a great stay here for 3 nights with our family. We did 2 game drives and also did a safari boat ride on the Kazinga Channel, and the Gorge Walk.”

“We stayed at the Kyambura Gorge Lodge and our experience was both relaxing and exhilarating. The design of the whole complex is beautiful and every effort was made by the staff to make our stay perfect.”

High season rates are applicable on bookings from 1 June to 30 September and 15 December to 28 February. (2022)

High season rates are applicable on bookings from 1 June to 30 September and 15 December to 28 February. (2023)

Standard booking (Up to 3 rooms)

Group booking (4 and above rooms)

For rates for East African residents and the DRC, as well as bona fide conservation organisations please contact enquiries@volcanoessafaris.com.