Volcanoes Safaris is the only African safari company to have built its own exclusive luxury safari lodges near a selection of the gorilla and chimpanzee parks of Uganda and Rwanda. Volcanoes Safaris lodges were conceived and built by Praveen Moman and a team of African builders led today by Cyprien Serugero, who was born near Virunga Lodge in Rwanda. Stuart Forbes Associates have been architectural consultants for Volcanoes Safaris since 2018.

In design and style, we remain true to our ecological principles. The buildings are low-impact. We use solar power wherever possible, harvest our own rainwater, recycle waste and use local materials and supplies. We employ, train and empower local people to be the core workers  and managers: it is important to us that a sizable portion of revenue goes towards bettering living conditions for locals. We have sought to retain the core Afro-shabby-chic ethos that was derived from Praveen’s life experiences – the simplicity of life in the bush. At the same time the quality and refinement has reached a new level of sophistication.

Our primary building style derives inspiration from many sources: from the homes of African villagers, the landscape, the handmade approach, and the improvised design by eye rather than the obviously contrived (called kinege in Swahili). We have sought to develop lodges that are sensitive to local culture and aesthetics, connect to the local community and conservation of wildlife and seek to use resources responsibly.

We have been refining and upgrading the unique Volcanoes Safaris lodges as part of a 4 year plan to re-imagine the properties, due to be completed in 2022. The understated, timeless, distinctive style of Volcanoes lodges is being evolved in a subtle way so the lodges do not lose their essential character, and the Volcanoes style of design and decoration is being taken to a new luxury level. The colors and textures of local fabrics and artefacts reflect the warmth and exuberance of the cultures from the Great Lakes of Africa.

Contact us to book your stay at a Volcanoes Safaris lodge or learn more about how we are supporting conservation activities and local communities. 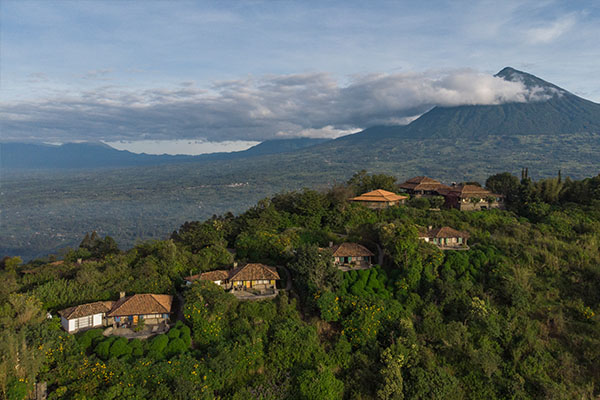 High season rates are applicable on bookings from 1 June to 30 September and 15 December to 28 February. (2022)

High season rates are applicable on bookings from 1 June to 30 September and 15 December to 28 February. (2023)

Standard booking (Up to 3 rooms)

Group booking (4 and above rooms)

For rates for East African residents and the DRC, as well as bona fide conservation organisations please contact enquiries@volcanoessafaris.com.