“Wherever you stop in this country,” said Alex Kagaba, “the ground will always produce people.” We’d parked on a dusty escarpment along the shore of Lake Kivu to take in the view.

This time, I thought he might be wrong. A couple of breeze-block homesteads, tin roofs gleaming, stood out on a hillside swathed in deep green, but for once we weren’t passing through the settlements that lined our route, weren’t being waved at by neatly clad schoolchildren shouting “Mzungu!” (their go-to greeting for white visitors).

Then, sure enough, an unheard signal: first one, then another, then half a dozen boys appeared, jogging down the asphalt.

Grinning, the first tried his luck: “Hello mzungu! Give me money!” before the second tried a different tack: “Give me a pen!” It seemed a reasonable request, and I turned to dig one out of my bag, before Alex intervened.

“No! This is not the way children are taught to behave in Rwanda.” A rapid lecture ensued, carried out in the local Bantu language, Kinyarwanda. “I’m asking them why you should give them anything when they haven’t worked for it,” said Alex, as the boys listened respectfully, while looking increasingly sombre. 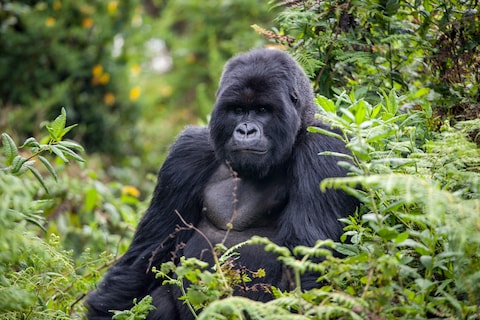 “Now, Ben. You have some pens?” I handed over a couple of Biros. Another rapid-fire exchange: who was top in their class at school? What was the name of the governor of the western province? The pens were distributed to the brightest and best, and a joke or two from Alex sent the boys on their way, smiles restored.

You don’t get something for nothing in Rwanda. Next year marks a sombre anniversary: it will be 25 years since the 1994 genocide that led to the death of up to a million Tutsi at the hands of the ruling Hutu majority.

The awful culmination of the Rwandan Civil War, the roots of the massacre lay in the residue of a colonial-era divide-and-rule policy that emphasised previously non-existent ethnic divisions. A hundred days of violence, murder and rape lasted from April 7 to mid-July, with national ID cards that listed ethnic classifications making it easy for Tutsi to be rounded up and killed.

In the aftermath, following the takeover of the capital Kigali by the Tutsi-backed Rwandan Patriotic Front, led by the current president Paul Kagame, two million Hutus were displaced, becoming refugees.

By any standard, that’s a lot to recover from. Yet almost a quarter of a century later, everything has changed. Rwanda – one of the smallest but most densely populated countries in Africa – seems full almost to bursting point, with more than 50 per cent of the population under the age of 20, born after the genocide.

President Kagame, criticised internationally when a change in the constitution allowed him to accept a third term in office in 2017, has nevertheless brought stability since he was first elected in 2003 and has pushed to rejuvenate his country.

Rwanda is safe, it is clean (indeed it is almost entirely litter free, thanks to a ban on plastic bags and the monthly Umuganda Day, whereby everyone does their bit to clean up) and international investment is encouraged. The road Alex and I were driving along was paid for via a $116m (£90m) Chinese loan.