An interview with Praveen Moman of Volcanoes Safaris 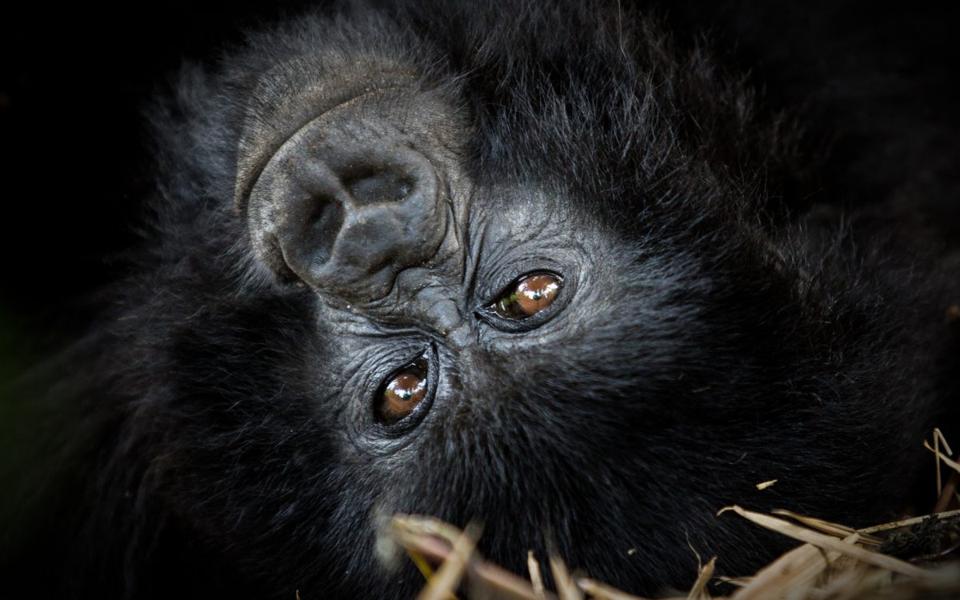 “From the first time you see them, you feel these people are related to you. Their eyes, how they look at you…” – Praveen Moman

Praveen Moman admits that 1997 wasn’t the best time to start a business in Rwanda. It was four years after the end of a staggeringly devastating civil war, just three since the Rwandan Genocide. Moman, 62, born in Uganda of a Punjabi family who came to East Africa in the 1930s, was unemployed. He’d been working for 20 years as a political advisor in London and Brussels. But, he says, “The connection with Uganda remained very strong. One day I woke up and went back there and thought, ‘this is where I have to start doing something.’” Volcanoes Safaris was born, growing from a few humble camps along the Virunga Mountains to three lodges in Uganda and one in Rwanda. Celebrating Volcanoes’ 20th anniversary, Moman talks gorillas and giving back to the local community.

SF: Have you come to see gorillas differently since you’ve been working in Uganda and Rwanda?

PM: From the first time you see them, you feel these people—and I do mean people— are related to you. Their eyes, how they look at you, and their hands, which have very strong parallels to ours. These are creature in the wild who you don’t know, but they’re as curious about you as you are them. You’re connecting to your cousins, and the gorillas recognize this. Their behavior is so human, and that’s what makes [seeing them] such a life changing thing.

SF: Walk us through a meeting with a gorilla family.

PM: You’ll get a briefing on how to behave with the gorillas and then you start walking. There are rangers monitoring the whole time. You might drive 10-30 minutes along the Virunga Mounains. It’s an Afromontane forest. The undergrowth is limited; it’s very ethereal. There are no major bugs. It’s like a tropical version of a New England forest. You’ll hear and sometimes see amazing birds. Then you’ll move slowly and carefully in to see the gorillas. You’re behind the rangers and guides, who will keep pointing out the gorillas. You’ll have an hour, and it goes quite quickly. The gorillas are very docile gentle giants, moving, feeding, interacting with each other, interacting with you. 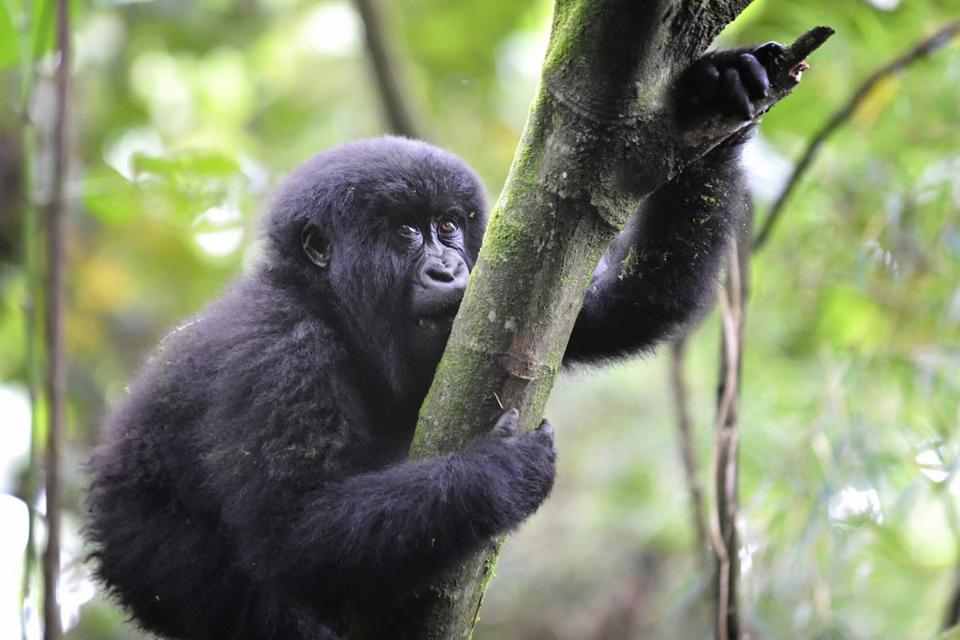 A baby gorilla wrapped around a tree limb

SF: How do you work with the local community?

PM: It’s essential that you connect to your neighbors. These are areas that have seen tremendous conflict and deprivation, and one can’t forget that.

The key component is connecting the gorillas and the economic benefit to the community. If there’s no economic benefit, will they remain alive? It’s a big question. For local people, [the gorillas] are an inconvenience. They occupy precious land, which, quite rightly, they would rather have for farming.

Tourism is an employer, and the trickle down is huge. It’s the supply chain of betterment. Ten years after the war in Rwanda, we built the lodge. [The locals] were subsistence farmers. Maria was one of our original day workers, paid by the day. For the last 10 years she’s been head of laundry. All of her children went to school; one is working in a hotel and one is going to university. Cyprien has been with us since the lodge was built. Today he’s head of construction. His daughter has gone to university. One of the children of someone else who’s worked with us is studying to become a doctor. We have provided 80 houses with electricity, which allows children to do their homework at night.

[We have] a hundred Batwa who are our neighbors and who have been homeless for 25 years, without land to live or farm on. The nonprofit arm of Volcanoes Safaris has bought land for them, will build houses for 100 people and has also [set aside] land for cultivation. From each booking, US$100 goes into the nonprofit so we have enough funds to keep doing this. 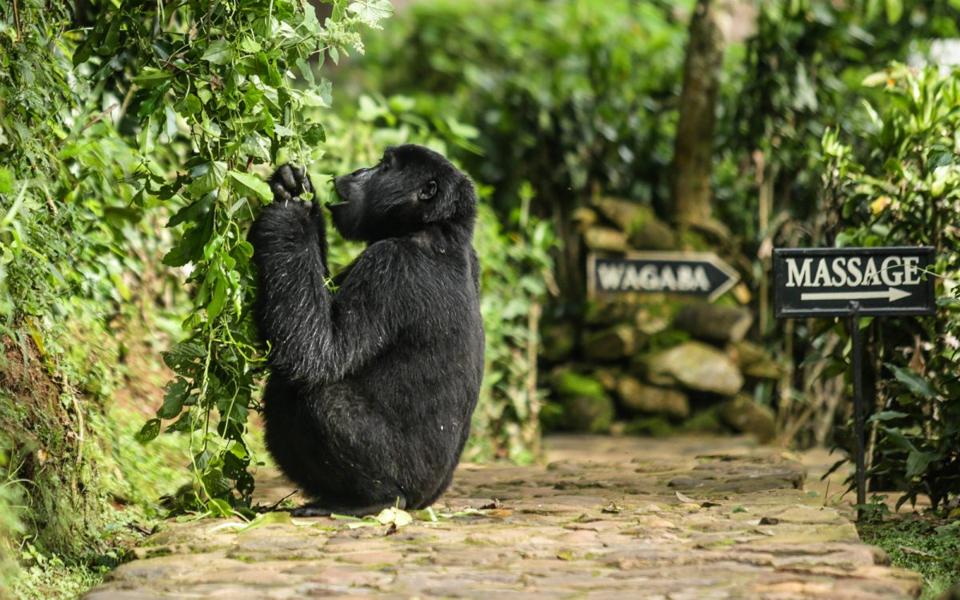 Having a snack at Bwindi Lodge in Uganda

SF: What can people do to support gorilla conservation?

PM: There’s a lot each of us can do. One is to lobby our governments to support the [protection of the] disappearing forests of the world. Another is supporting [conservation] organizations. Dian Fossey Gorilla Fund has for 50 years worked in this area, and has five generations of information; with them you can adopt a gorilla. Gorilla Doctors is a group of veterinarians working in these forests caring for the health of these gorillas. Conservation Through Public Health, which was founded by Gladys Kalema-Zikusoka, a Ugandan doctor trained in London, is concerned with human health on the edge of the forest, because the health of the population around the park boundary is important. If the local population have scabies, the gorillas get scabies. If the local population have digestive disorders, this can be transmitted to the gorillas. The gorillas are susceptible to human diseases. [Dr. Kalema-Zikusoka] also has programs to bring money back [to locals], such as one with coffee farmers. There’s also Wildlife Conservation Society, World Wildlife Foundation, African Wildlife Foundation, etc. 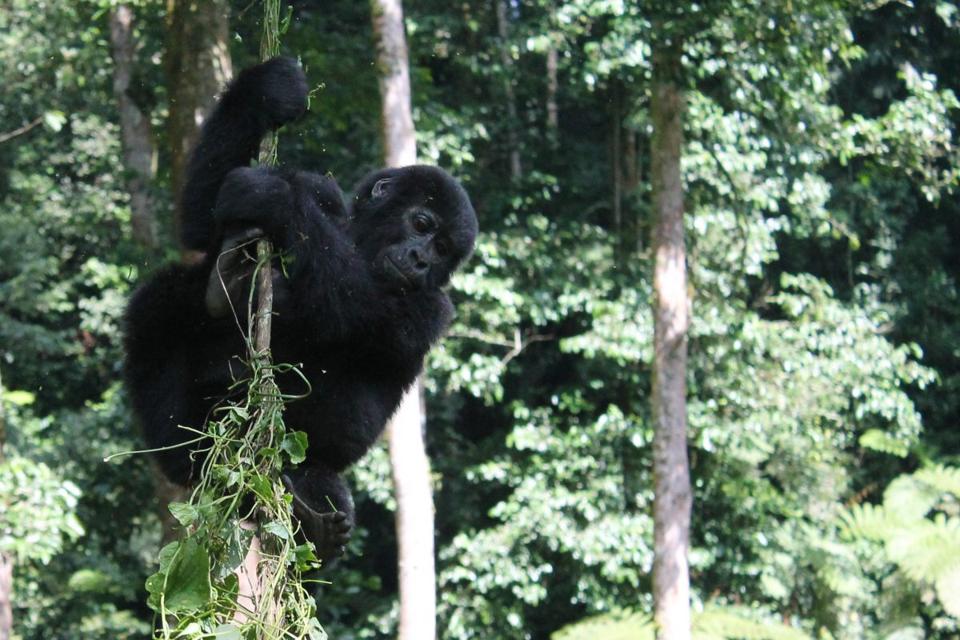 Mid-swing through the trees